Top 5 Wool Producing States in the US by Production Volume

Top 5 Wool Producing States in the US

Wool production in the United States has declined by more than 60% since the late 1980s—however, the wool industry in the US is currently undergoing a revival, bouncing back from a period of lowered demand and fierce competition against synthetic materials. The US is currently the third leading wool producing country in the world, and industry rejuvenation will help it to better compete with other major producers and serve international markets. Here are the top five wool producing states in the US in terms of volume:

2. California: California produced roughly 3 million clean pounds of wool in 2010. Though wool producing totals in this state have declined somewhat and the state’s output was significantly lower last year, the quality of wool from California tends to be high thanks to climate-related benefits.

3. Wyoming: Sheep and lambs in Wyoming produced more than 2.4 million pounds of wool last year, a slight increase from totals in 2014 and 2015, but a decrease from its production of 2.6 million in 2010. The state reportedly has more than 810,000 sheep that are used for wool production.

4. Colorado: Colorado’s wool producing capabilities resulted in 2.3 million pounds of clean wool in 2010. While bison wool has entered the US wool industry—though in a niche capacity—and alpaca wool is popular, most of the wool from this state comes exclusively from Colorado’s large population of domesticated sheep.

5. Utah: Though sheep in Utah are very vulnerable to predators—at one time, coyotes cost wool producing farmers more than USD 3.4 million in sheep and lambs—the state produced roughly 2 million pounds of wool in 2010. This number is expected to have risen considerably by the end of 2017.

Wool production seems to be slowly but surely undergoing revitalization in the United States, changing the sheep and lamb industry back to one that is focused on wool producing rather than meat producing. The fate of the industry will ultimately depend on the country’s textile and military sectors, who have traditionally been the biggest consumers of wool in the US. Textile mills turning to inexpensive synthetic materials helped to usher in the decline of the wool industry, but changing fashion trends and a push towards natural materials may help to reverse the damage.

Thousands of the US’s leading textile and apparel manufacturers can be in your contact list if you join BizVibe today. Whether you are looking for reliable suppliers, top food and drink manufacturers, wholesalers and potential customers in over 70 countries, or want to find out what your competitors are buying and which suppliers they’re using, BizVibe can help you reach out to sales prospects and decision-makers across the globe. 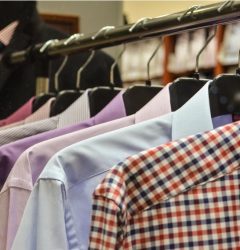