As the UAE’s most populous city, Dubai greatly contributes to the overwhelming amount of development activity happening across all Gulf Cooperation Council (GCC) countries. There are currently 4,627 active projects in Dubai and a total of 11,700 altogether in the UAE (December 2017) that are worth USD 818.2 billion. Both the UAE and Saudi Arabia represent 70% of all active construction projects in the GCC.

Six Construct is a construction company created in 1965 to serve as a multidisciplinary builder in the Middle East. As a subsidiary of the Belgium powerhouse, Besix Construct, it has easily become a leader in the building of commercial and residential properties, sports/leisure facilities, infrastructure and marine-related projects across the UAE.

This top 10 construction company in Dubai reported a regional revenue of USD 1.08 billion in 2016 and currently employs currently 16,000 in the Middle East.

The group’s construction company in Dubai, ALEC, was founded in 1999 and has grown to 14,000 employees, becoming a preferred contractor in the UAE. Their extensive list of completed resort hotels, themed projects, retail developments, high-rise towers, airport terminals and commercial buildings shows their influence on the UAE’s infrastructure. ALEC posted a revenue of USD 1.06 billion in 2016/2017 with a projected revenue of USD 1.09 billion in 2017/2018.

CSCEC Middle East is an integrated and operational entity of the world’s largest transnational construction company, China State Construction Engineering Corp. It’s quite impressive, especially since the company has only had a presence in Dubai and the rest of the Middle East since 2006. This construction company in Dubai was formally established at the end of 2007, and in such a short time has greatly contributed to the UAE’s success by delivering recognized mega projects in terms of progress, HSE, quality & cost and strictly following contractual agreements. The construction company in Dubai currently employs over 10,000 people and achieved a contract value of about USD 5.5 billion, with a revenue of USD 3.2 billion in 2015. CSCEC as a whole generated USD 128.3 billion in 2015 and in 2016 signed new contracts worth more than USD 303 billion.

Arabian Construction Company was originally founded in Yemen but is now headquartered in Dubai. The company is considered as one of the top 10 construction companies in Dubai and throughout the entire Middle East. ACC’s building capabilities include skyscrapers, mixed-use developments, hotels, cultural and public buildings, healthcare facilities, luxury residences and commercial buildings, smart buildings and interiors. They also have an oil, gas and industrial sector capable of constructing energy projects, marine projects, desalination plants, various pipelines and various defense infrastructures.  This firm’s revenue hit USD 1.1 billion in 2016 and boasts USD 5.3 billion worth of current and approved contracts as well as a backlog of projects worth about USD 3 billion. The company employs 19,000 workers, which includes almost 6,000 laborers and about 900 engineers.

Arabtec Construction is a subsidiary of the widely successful Arabtec Holdings. This leading construction company in the UAE was founded in 1975 and has held its place within the top 10 construction companies in Dubai ever since. They boast many capabilities such as residential, commercial and mixed-use high rises, hotels, residential communities, luxury villas, many facets of airport development, industrial projects, commercial buildings, stadiums, hospitals, museums, malls and infrastructure work. Their workforce includes around 40,000 employees with a total of 280 projects, current and completed, in their portfolio. As of September 2016, the company has a backlog of work at an estimated USD 5.2 billion. Arabtec was also rated as one of the top 150 global construction companies by the Engineering News Record.

Read More: The UAE’s Petroleum Industry Overview: One of the World’s Largest

ASGC has worked its way up to be known as a turnkey for special projects throughout the UAE. Since the moment they opened for business in 1989, their successes have been prevalent due to their on-time delivery of innovative buildings in the residential, commercial, leisure, hospitality, healthcare, education, social infrastructure and industrial sectors. ASGC not only utilizes but also develops cutting-edge technology including drones, IoT data applications, building information modeling (BIM) and 3D scanning technologies. The company employs 1,100 construction professionals and 9,210 laborers while bringing in approximately USD 816.8 million in revenue in 2016.

Khansaheb was founded in 1935 and is the oldest of all the construction companies in Dubai. This company has many skills outside of building and road construction like interiors, project and programme management, design and design management, lighting and small power distribution, fire detection and fire-fighting systems, cooling and ventilation systems, plumbing and wastewater installations, renewables, and energy saving solutions, the design/fabrication/installation of structural steel & architectural metalwork, and the list goes on. For this top 10 construction company in Dubai, their building sectors include residential, commercial, industrial, hospitality, infrastructure, retail, sports/leisure, roads/highways, and defence.

Wade Adams Contracting was registered in 1995 and has since made many strategic investments in land, buildings, industrial plants, and equipment. This is not only one of the major construction companies in Dubai but also owns 7 other holdings that employ a combined 11,000+ people. As of 2017, their confirmed upcoming projects equal to an impressive USD 1.1 billion. Their contracting expertise extends far beyond just residential, industrial & building complexes, which is what makes this one of the top 10 construction companies in Dubai. Some of their additional skills are the construction of interchanges, tunnels, and highways; water supply, drainage & sewerage systems; mechanical, electrical and plumbing systems (MEP); marine works; dam construction; bulk earthworks and grading activities; airport construction; oil and gas sector projects; infrastructure for residential complexes; and last but not least, jogging and cycle tracks.

Actco General Contracting is the civil and electromechanical builders that have been helping create Dubai’s infrastructure since 1975. This top 10 construction company in Dubai is responsible for many major infrastructure projects like industrial developments, utilities and utility buildings, power plants, desalination plants, oil & gas plants, airport facilities and some commercial and residential buildings. Actco also provides services in industrial manufacturing and power/utility projects, especially projects relating to wastewater treatment. This company employs over 8,000 people.

Al Habtoor Group is one of the most respected and well-known construction companies in Dubai. Since 1970, this construction company has grown along with the UAE and has helped to shape it as the famous construction-based country it is today. Al Habtoor has many other sectors besides construction, including real estate, publishing, and education, but construction is its most well-known trade. In 2015 the current value of their investments in Dubai was worth USD 3.4 billion and the company saw a 16.1% increase in revenue from the previous year (2014).

Dubai is a powerhouse builder and represents 72% of all project activity in the UAE. The city’s prominence is expected to rise alongside the UAE’s overall economic growth since the appointment as host of the Expo 2020; experts are forecasting a 4.4% growth in 2018 alone. Since the Expo announcement in 2013, property values have also increased in Dubai by over 30%. Business owners, homeowners and construction companies in Dubai and around the world are flocking to this major city in the GCC to get a piece of the construction-boom-pie any way they can.

If there are any other builders that you think should be on our list of the top 10 construction companies in Dubai, please leave a comment below. 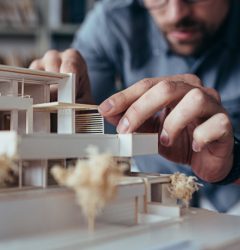