Dark Matter: The Future of the World’s Blackest Black 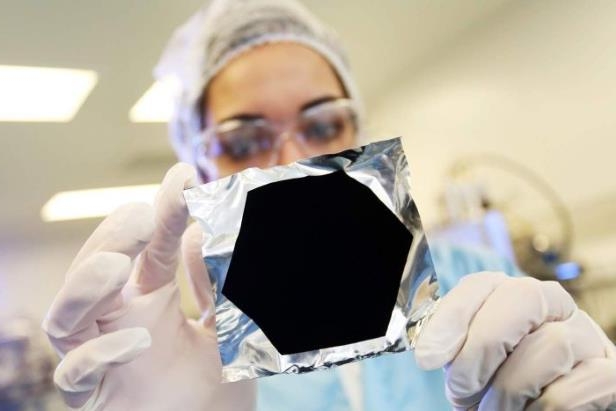 Vantablack is the new black

Vantablack is, to date, the darkest material ever made by humans. It absorbs more than 99.965% of light projected onto it, causing 3D objects coated in Vantablack to appear as silhouettes. Vantablack is made up of carbon nanotubes that are grown on aluminum surfaces—the “Vanta” in its name stands for “Vertically Aligned NanoTube Arrays”. Each square centimetre of Vantablack contains about a billion nanotubes. These nanotubes continually deflect light that is projected onto them, essentially “trapping” light within the material. Light goes in, but can’t get back out.

Surrey NanoSystems, based in East Sussex, England, originally developed Vantablack for scientific use and on spacecraft and aircraft. Its most common application thus far is on telescopes to reduce stray light interference. However, Vantablack also has a number of potential applications outside of these industries. It has applications in consumer electronics (especially smart phones and touch screens) and clothing and textiles, and also has number of artistic, architectural, and creative applications to be explored.

The feud-iest feud over the blackest black

Vantablack is so in-demand with creatives that it’s currently the subject of a contemporary art feud. British artist Anish Kapoor, whose art explores void forms and negative space, bought exclusive artistic rights to Vantablack in 2016 and has recently begun to incorporate it into his work. This has angered many other artists who feel that Vantablack’s artistic potential should be available to all. One artist, Stuart Semple, even created what he calls “the World’s Pinkest Pink” and “the Most Glittery Glitter” in retaliation and banned Kapoor from using the pigments, purchasing them, or having them purchased on his behalf. In December 2016, Kapoor posted a picture of his middle finger dipped in the Pinkest Pink on his Instagram page, further igniting the artists’ feud. Semple, in response, posted a video of two fingers coated in what he claimed to be Vantablack.

However, unless Semple subjected his hand to temperatures of at least 100 degrees Celsius during the application process, the black in the video was not Vantablack. Vantablack doesn’t come as a pigment like Semple’s Pinkest Pink, and you can’t buy it by the gallon. The original Vantablack must be applied meticulously in a laboratory setting via a chemical vapor deposition process. While Surrey NanoSystems also offers a spray-on version that is slightly less black than the original (it absorbs 99.8% of light), it too requires intense heat during the application process in order to properly adhere to a surface.

With this in mind, it might not be as easy to “share the black”—as the social media hashtag demanding that Anish Kapoor release Vantablack says—as many would like, but it will be undeniably interesting to see how the darkest material’s possibilities in art are explored in the future and what other feuds it may inspire.

At present, Vantablack isn’t considered suitable for applications that involve Vantablack-to-skin contact due to the delicate microstructure of the nanotubes, the complexity involved in its application, and, of course, the heat required to apply it. However, while a little Vantablack dress might not be an immediate possibility, clothing made from Vantablack isn’t too far off. Surrey NanoSystems has said that they are working with fabric to find a way to apply Vantablack without compromising its physical properties or irritating the skin of its wearer. This may involve adding a protective layer over the adhered Vantablack entirely, protecting its structure. While the Internet has long speculated over Vantablack ninja suits, more practical applications for the material are in soldiers’ uniforms, where it would make troops virtually invisible in nighttime operations and much harder to detect during the day. When Vantablack eventually finds its way into everyday clothing, it will offer the fashion industry and consumers an entirely new dimension to explore.

Thousands of world’s leading textile companies  can be in your contact list if you register to join BizVibe today! Whether you are looking reliable suppliers, top textile manufacturers, wholesalers and potential customers in over 90 major countries, or finding out what your competitors are buying and which suppliers they’re using, BizVibe can help you reach out to sales prospects and decision-makers in the textile industry across the globe.

Color Changing Clothing is Heating Up the Market