The textile and apparel industry in Tanzania is on route to become one of the leading sourcing sectors and foreign investment destinations in Africa. The country’s Textile Development Unit (TDU) praises Tanzania as “the best overall location for making apparel in Africa”, due to its low production cost, preferential trade access, improving industrial infrastructure, and ample availability of raw cotton.

Today, Tanzania is already the world’s fourth largest producer of organic cotton. According to the figures from Bank of Tanzania, the total value of Tanzania’s cotton exports rose by 55% in 2016, reaching $46.8 million from $30.2 million a year ago. This substantial growth was believed to be driven by increase in both export volume and unit price. Meanwhile, the area planted by cotton has increased by 66% from 69,886 acres in the 2015/16 season to 116,110 acres in the 2016/17 season.

For the 2017 season, the Tanzanian government forecasts that the country’s cotton production is very much likely to double with estimated production reaching as much as 300,000 tons. This number also represents a four-year high, as stronger prices for cotton encourage farmers in Tanzania to increase cultivation. Nowadays, at least 300,000 farmers produce cotton in the country, but that can quickly double when the weather is good and prices are more attractive, says the government.

In terms of cotton output, Tanzania is currently the biggest rival to Zimbabwe – sub-Saharan Africa’s largest cotton producer. Tanzania’s cotton output peaked at about 370,000 tons in the 2005-06 season, according to the nation’s Cotton Board. In 2012-13, cotton production in the country was down to about 352,000 tons, then fell to just over half of that in the last few years.

The textile and apparel manufacturing sector in Tanzania also benefits from duty-free access to the EU, the US and South Africa. The Tanzanian government is very positive that the country’s increasing social and political stability, ecological and socially compliant textile and clothing industry, good transport infrastructure, and availability of cheap, English-speaking labour will make Tanzania a strong competitor in the global textile and apparel sourcing market.

However, the textile and apparel industry in Tanzania also faces some limitations, such as size and the products it offers, and lacks experience in manufacturing high quality and value-added garments for export markets. But on the bright side, Tanzania’s clothing exports are modest but its exports of knitted clothing are growing as textile groups in the country invest in knitting capacities. Tanzania has also gradually become more popular among foreign textile investors, and the future of Tanzania’s textile and apparel industry is believed to be more promising. 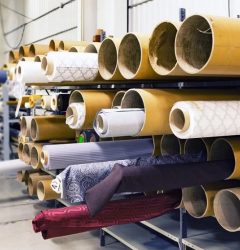