The Fast Food Market in China Expects a Slower Growth

According to the recent market report from Euromonitor, fast food market in China is expected to have an only modest CAGRs of 2% in 2017’s value sales, this is similar figure as 2016’s. The slow growth is mainly driven by the steady demand from consumers who are looking for convenience and taste. Fast food served in convenience stores across China is believed to be the main contributor for the value growth, with a 9% CAGR in 2017, driven by strong demand from urban residents with fast lifestyles and the pursuit of great convenience, in addition to the food variety offered by convenience stores.

Read more: The Future of the Fast Food Industry

Only three decades ago, Western fast food vendors entered China for the first time, then suddenly enjoyed a booming business. As of 2015, KFC has established over 4600 stores in China, compared to 2,100 in 2010 and 1,759 in 2005. Yum, the parent company of KFC, Taco Bell, and Pizza Hut, also operates about 1,100 Pizza Hut restaurants in China. McDonald’s is another fast food brand that has had a fast expand in China. Before 2015, Mcdonald’s averagely opened 10 new restaurants in China every week.

However, things are changing for fast food market in China, especially for Western fast food vendors. A Bloomberg report suggests that Yum and McDonald’s Corporation have a combined share of 38% in the Chinese fast food market. But now their shares have been decreasing significantly, with McDonald’s dipping from 16.5% in 2013 to 13.8% in 2015, while Yum Brands downing from 40% in 2012 to 23.9% in 2015. The change of consumers’ dining preference, particularly young consumers’, and the increasing competition from the local fast food vendors are the main factors for the market growth slowdown.

It is still expected that the fast food market in China will continue to grow, but the pace will be slower. According to the estimate by IBISWorld, although the fast food market in China generated $135.6 billion in 2016, increased by 8.3% from 2015, the growth of revenue is likely to achieve only around 10% from 2011 to 2016, meaning that the growth rate is set to slow down, and this downward trend is expected to continue over the next few years.

Thousands of China’s leading food and beverage companies can be in your contact list if you register to join BizVibe today. Whether you are looking for reliable suppliers, top manufacturers, wholesalers and potential customers in over 70 major countries, or finding out what your competitors are buying and which suppliers they’re using, BizVibe can help you reach out to sales prospects and decision-makers in that particular industry across the globe. 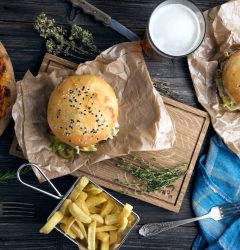