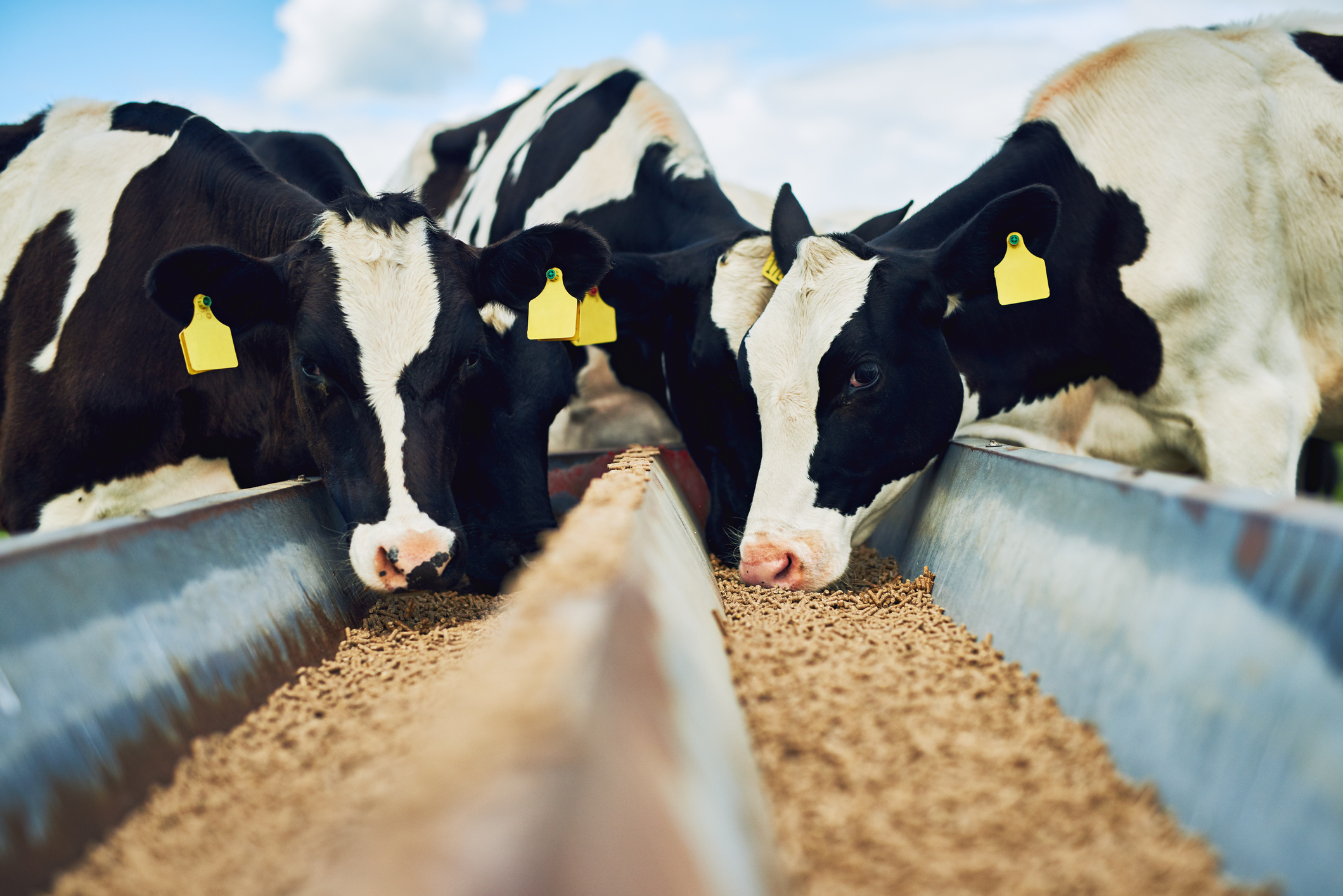 The Current State of the Top Animal Feed Manufacturers in 2022

The top 10 largest animal feed manufacturers in the world will continue to drive growth for the industry in 2022. The global animal feed industry is growing at a rapid rate, with the global animal feed market projected to reach USD 589.4 billion by 2027, growing at a CAGR of 3.5%. The top animal food companies in the world are leading this growth, attributed to the rising demand for animal products, as well as an increase in the number of livestock producers worldwide.

This article will provide a breakdown of the top 10 largest animal feed manufacturers in the world as of 2022, including information about their revenues and annual production. This data can help you answer the following questions about the global animal feed industry:

The global animal feed industry is growing at a rapid rate. With the increasing demand for meat and dairy products, the need to produce more food has led to an increase in the production of animal feed. However, this growth has not been without its challenges.

In this article, we’ll go over the global animal feed industry stats and trends you need to know about.

The following is a list of the ten largest producers of animal feed in the world ranked by production capability, revenue, influence, and more. We also elaborate on the specifics of their product and service offerings, their main achievements, and where in the world the leading animal food manufacturers are located. 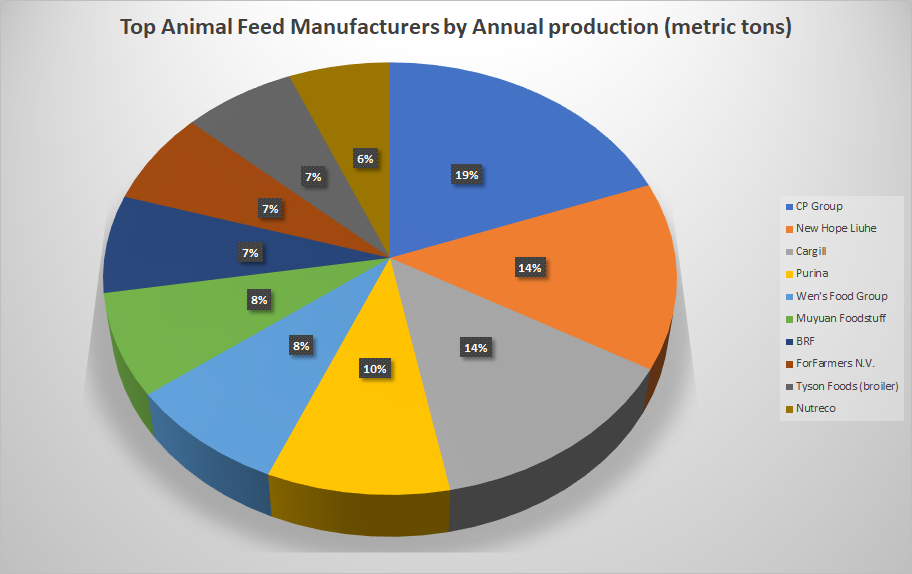 Here is a ranking of the top animal feed manufacturers in the world based on various factors, including feed production, revenue, and market leadership.

New Hope Liuh ranks number 2 on this list of the top animal feed companies in the world with an annual production of 20,000 metric tons. New Hope Liuhe Group is a Chinese animal feed manufacturer. It was founded in 2000 and is headquartered in Guangzhou, China. The company produces feed for cattle, poultry, pigs, dogs, and cats.

New Hope Liuhe has become one of the largest animal feed producers in China by acquiring several other companies over the years. The company has production facilities in China, Vietnam, and Thailand with an annual capacity of 20 million metric tons (MT).

Cargill ranks 3rd on this list of the top 10 largest animal feed manufacturers in the world in 2022. Cargill is present in more than 66 countries and has a workforce of over 136,000 employees. It was founded in 1865 by William Wallace Cargill and is headquartered in Wayzata, Minnesota, United States.

Cargill deals with the production and marketing of grain products and commodities, including beef, pork, and other livestock. Its other services include financial services, insurance, and real estate. Its activities are spread across the globe with its global headquarters located in Minneapolis.

Cargill has been named one of “The World’s Most Admired Companies” by Fortune magazine for 17 years. Cargill produces food and agriculture products, which it sells to wholesale distributors and retailers globally. It operates in three segments: food ingredients, crop inputs, and energy. It offers a range of ingredients including sweeteners, flavorings, meat products, seafood products, and more. The company also provides crop inputs such as nitrogen-based fertilizers, seeds, and other agricultural chemicals. In addition, it provides energy services including coal mining services; owns oil refineries that process crude oil into petroleum products for customers, and owns ethanol plants that produce corn-based ethanol fuel for customers.

Purina ranks 4th on this list of the top 10 animal feed companies of 2022. Purina is a multinational company that develops, manufactures, and markets pet food products for dogs, cats, horses, and fish. It was established in 1894 by William H. Danforth as the Ralston Purina Company in St. Louis, Missouri, United States. The company has been producing animal feed since 1894 when it was founded as Ralston Purina Co., which became a publicly traded company in 1899. Today, it is known as Nestlé Purina PetCare Co., which is headquartered in Arden Hills, Minnesota while its main manufacturing facilities are located in St. Louis, Missouri; Shanghai; Sydney; Sao Paulo; and Brussels. The company has more than 40 manufacturing facilities serving customers throughout North America (United States) and Europe (Belgium). Its products include premium dog food brands such as Beneful® and Alpo®.

Wen’s Food Group has three main production facilities: one in Dongguan, one in Huizhou, and one in Shenzhen. It also has two distribution centers in Xiamen and Yantai, both located on the coast of mainland China.

The Muyuan Foodstuff Company is a well-known Chinese animal feed company, which ranks 5th on this list of the largest animal feed manufacturers in the world. The company is headquartered in Zhejiang, China, and has several plants across China. The company produces and sells chicken feed, pig feed, fish feed, rabbit feed, and pet food.

Muyuan Foodstuff Company was founded in 2006 by Mr. Wang Jianlin, Chairman of Dalian Wanda Group Co Ltd. It is considered one of the fastest growing livestock feed companies in China with annual revenue exceeding USD 12 billion. The company produces 11 thousand metric tons of animal feeds every year. Its products are sold across the Asia Pacific region including Australia, Japan, New Zealand, and South Korea.

BRF SA ranks 7th on this list of the top 10 livestock brands in the world in 2022.  BRF SA is an international food company headquartered in São Paulo, Brazil. It is the largest producer of animal feed in Latin America and the seventh largest in the world. The company produces more than 10 million tons of feed annually, which represents approximately 40% of its total sales.

ForFarmers N.V., formerly Royal De Heus NV, is a Dutch multinational animal feed company headquartered in Gelderland, Netherlands. The company is one of the world’s largest manufacturers of livestock feed and one of the top three producers of dairy cattle feed in Europe. It is also active in the equine feed market, selling products under its ForFarmers Horse Feed brand.

ForFarmers was formed in 2007 through the merger of Royal De Heus NV and ForFarmers Feeds Ltd. In 2008, it acquired the Polish animal feed producer Mieszko Spółka Akcyjna from the Agro-Farma Group. The company completed an initial public offering on Euronext Amsterdam in 2015, listing its shares under the symbol DFN.

Tyson Foods ranks 9th on this list of the top 10 largest animal feed manufacturers in the world in 2022. Tyson Foods is an American multinational corporation based in Springdale, Arkansas that produces and distributes chicken, beef, and pork. It is the largest meat-producing company in the world and has operations in 37 countries. Tyson Foods was founded by John W. Tyson in 1935 and is owned by his son Don Tyson, who took over the business in 1961. In 2011, it became a wholly owned subsidiary of Hillshire Brands Company after it acquired Keystone Foods Inc., which had previously acquired IBP Inc., another meat processor company founded by Don Tyson in 1971.

Rounding out this list of the top 10 largest animal feed companies in the world is Nutreco. Headquartered in Amersfoort, Netherlands, Nutreco specializes in fish feed and animal nutrition. Nutreco is a Dutch-based company that produces fish feed, animal nutrition, and related products. With an annual feed production of 9,000 metric tons, they are one of the top 10 largest animal feed manufacturers in the world.

The company was founded in 1979 and has since grown into one of the most successful companies in its industry. It also operates under several subsidiaries: Nutreco International BV (NIB), Nutreco Holland BV (NHB) and Nutreco Belgium N.V./S.A., among others.

So, if big brands like Purina and Cargill know how to tap into this market with the right strategies, you should too. Research how these companies approach animal feed.

The Future of the Animal Feed Industry

Animal feed includes all types of feeds that are used by farmers to feed their livestock such as cows, pigs, horses, poultry, and others. Animal feed can be divided into two broad categories: concentrates and pellets. Concentrates are those feeds that are high in protein content while pellets have higher nutritional value than concentrates because they contain both protein and energy in them.

Increasing global meat consumption has led to increased demand for animal feed which in turn has increased the consumption of corn and soybeans as major ingredients in animal feeds globally over the past few years. This trend is expected to continue throughout the forecast period due to growing demand from emerging economies such as China, India, and Brazil among others where consumption levels are still low compared with developed countries but are expected to rise significantly over time resulting in increased demand for corn & soybeans as well as other

There are a lot of animal feed manufacturers in the world, but only a few of them have made it to the top. These companies have been able to sustain their business for years by making high-quality products and adapting to new trends. The future success of these companies depends on how well they can stay engaged in the international marketplace. They need to ensure that their production processes are efficient and cost-effective so that they can compete with other leading brands in this industry.

The global demand for agricultural commodities is increasing at a considerable rate due to the growing population across the globe. Moreover, the demand for animal feed such as poultry feed, cattle feed, fish feed, and pet food is also on the rise. This page provides a complete list of animal feed manufacturers by country and annual production.

Additional Animal Feed Manufacturers in the World in 2022

In addition to the top animal feed companies, there are various other animal feed industries to keep an eye on in 2022.

These are the top 5 largest commercial fish feed manufacturers in the world in 2022.

Check out the full list of the top commercial fish feed manufacturers on BizVibe.

These are the top 5 largest bulk chicken feed manufacturers in the world in 2022.

Check out the full list of the top bulk chicken feed manufacturers on BizVibe.

Network with the complete list of animal the top feed manufacturers only on BizVibe.

Many UK Food and Beverage Firms Optimistic Despite