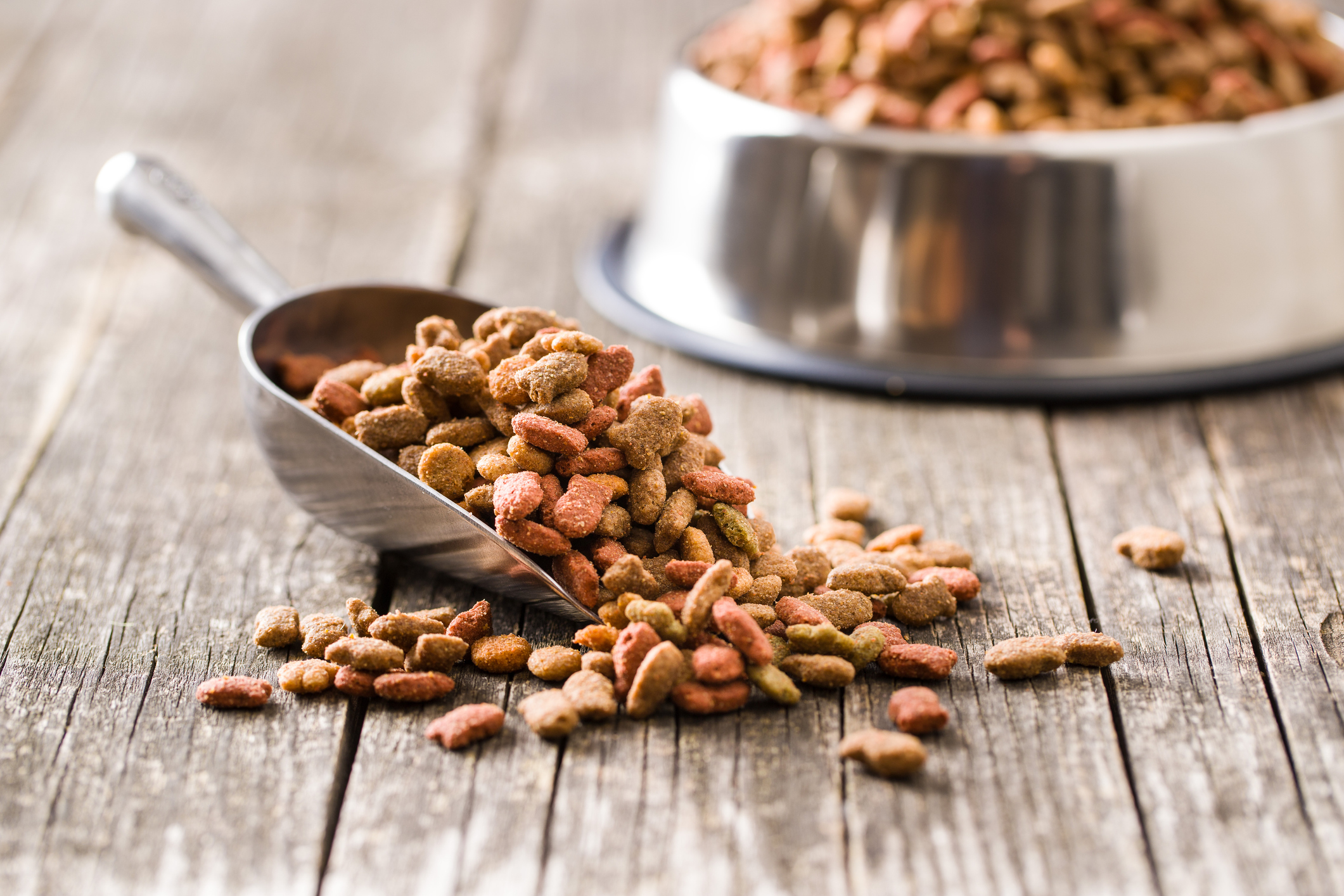 The Current State of the Top Pet Food Companies in 2022

The growth drivers for pet food are rising disposable income and urbanization, changing lifestyles, increasing awareness about pet care and changing eating habits of pets, growing demand for premium products, increasing demand from emerging markets such as China and India, and growing population of dogs and cats worldwide, increasing awareness about health benefits of homemade meals for pets among consumers, and increasing popularity of natural foods. The top pet food companies in the world are leading this growth. Pet food manufacturers have been focusing on innovation to maintain their market share in the industry by introducing new products based on consumer preferences such as natural ingredients or organic diets for pets.

How big is the global pet food industry? The global pet food market size is valued at USD 99.10 billion in 2022. Who are the largest pet food manufacturers? At present, the market is dominated by large companies such as Mars Petcare, Inc., generating USD 37 billion annually. General Mills, Nestlé Purina PetCare, The J.M. Smucker Company, and Hill’s Pet Nutrition round out the top pet food brands in the world.

The pet food industry has seen significant changes over the past decade, and more are expected to come. As consumers have become more health-conscious, the pet food industry has evolved to meet those demands and improve its offerings for both pets and their owners. The top pet food companies in 2022 will continue to focus on creating innovative products that are tailored to each customer’s needs. This means offering a wide range of different types of food, including organic options as well as those made with natural ingredients. It also means providing customers with choices when it comes to packaging materials and how much they pay for their products.

This article will provide a breakdown of the top 10 largest pet food companies in the world as of 2022, including information about their revenues and annual sales. This data can help you answer the following questions about the global pet food industry:

BizVibe’s database of the top pet food brands include the profiles of major companies such as Mars Petcare, Inc. and General Mills, as well as many smaller companies. The database also contains detailed information about each company’s products, services, risks of doing business, and much more. View company insights, revenue, number of employees, and more for the top 10 largest pet food companies in the world.

The global pet food industry is one of the fastest growing in today’s economy. Recently, it has been estimated that the industry will grow at a rate of 5% annually until 2022. This growth is due to several factors, including an increase in pet ownership and the desire for better quality food.

In this article, we’ll go over the global pet feed industry stats and trends you need to know about.

The following is a list of the world’s ten largest pet food brands ranked by production capability, revenue, sales, influence, and more. We offer detailed information about the product and service offerings, major achievements, and geographical locations of the leading pet food companies. 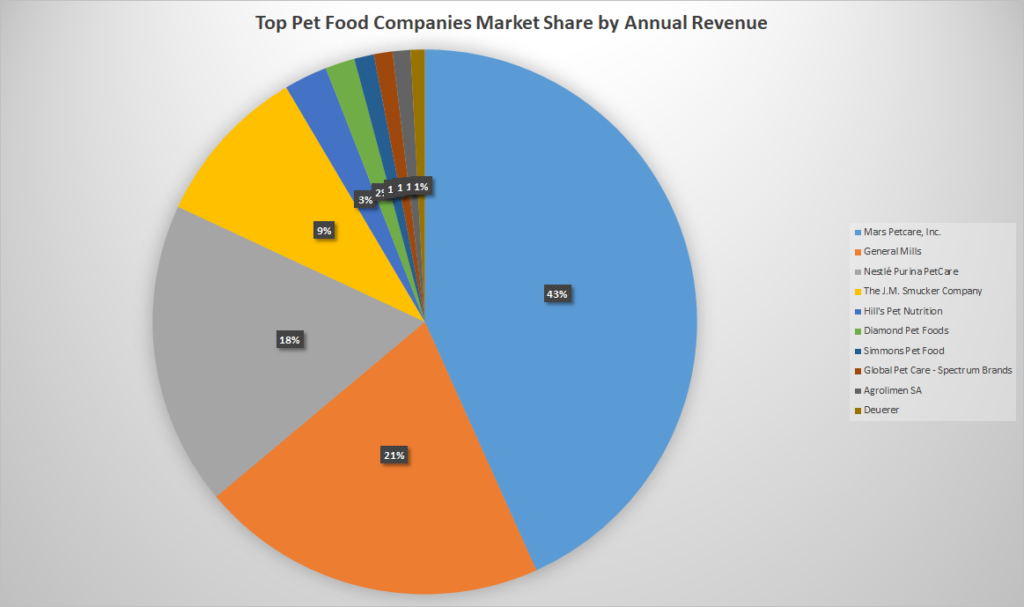 The following is a list of the top pet food companies in the world, ranked according to production, sales, revenue, and market leadership.

General Mills ranks 2nd on this list of the top 10 largest pet food manufacturers in the world in 2022. General Mills is a leading global food company that strives to make its products safe and nutritious while reducing the impact of its business on the environment through sustainable practices. General Mills is one of the largest pet food companies in the world. It owns brands such as Purina, Alpo, and ProPlan, among others. The company’s pet care division generated $17 billion in revenue in 2017.

Nestlé Purina PetCare ranks 3rd on this list of the top 10 largest pet food companies in the world in 2022. Nestlé Purina PetCare is a Swiss-owned American pet food company and a subsidiary of Nestlé. It is headquartered in St. Louis, Missouri, United States, and was founded in 1894 by William H. Danforth as the Ralston Purina Company. In addition to pet foods, it also produces animal health products such as prescription diets and over-the-counter medications for pets.

Nestlé Purina PetCare Company has more than 1,000 facilities in 60 countries around the world. The company employs more than 20,000 people worldwide with sales topping $11 billion in 2017

The J.M. Smucker Company ranks 4th on this list of the top 10 pet food brands in the world in 2022. The J.M. Smucker Company is a pet food company based in Orrville, Ohio, United States. It owns the Meow Mix and Kibbles ‘n Bits brand names. The company was founded by Jonathan M. Smucker in 1897 as a fruit processing company and later branched into peanut butter production. In 2000, it merged with Best Foods Inc., which had been formed in 1929 through the merger of Best Foods and RJR Nabisco’s meat-packing subsidiary, Oscar Mayer & Co., which included Barnum’s Animal Crackers brand.

The company manufactures and distributes pet foods under the Hill’s Science Diet and Prescription Diet brands. It also manufactures over-the-counter human medications under Hill’s brand name at its manufacturing facility in the United States.

Hill’s Pet Nutrition has a wide range of products including dog food, cat food, puppy food, and kitten food. The company also manufactures prescription diets for dogs and cats with conditions such as allergies, kidney disease, and diabetes mellitus.

Diamond Pet ranks 6th on this list of the top 10 largest pet food manufacturers in the world. Diamond Pet, Inc. is a manufacturer of pet food and other products for companion animals. Diamond Pet is a subsidiary of Mars Inc., one of the world’s largest privately held companies.

Diamond Pet was founded in 1979 as Diamond Foods by James Dyson, founder of Dyson Ltd., and his wife, Gaynor Dyson. The company changed its name to Diamond Pet Foods in 1995 and was acquired by Mars Incorporated in 2000 for USD 1.6 billion. It is headquartered in Meta, Missouri, United States. In 2017, Diamond Pet ranked No. 1 on Forbes’ list of America’s Most Promising Companies.

Simmons Pet Food ranks 7th on this list of the top 10 largest pet manufacturers in the world in 2022.   Simmons Pet Food is an American pet food manufacturer that was founded in 1990 by David Simmons. Simmons became a publicly traded company in 2018. In 2019, it merged with Advance Pet Products Company to form Advance Simmons Pet Products LLC. The company is headquartered in Siloam Springs, Arkansas, and has manufacturing facilities across North America and Mexico. It markets its products under brands including Advance and AvoDerm Natural Foods for Dogs and Cats, among others. The company offers wet pet foods, dry pet foods, and treats for dogs and cats across multiple categories such as grain-free or raw diets. In recent years, the company has acquired several smaller companies including Natural Life Pet Foods (2018), Nutro Products Co (2019), and Meow Mix Co (2019).

Global Pet Care – Spectrum Brands is 8th on this list of the largest pet food companies in the world. Spectrum Brands is a multinational corporation that manufactures and distributes consumer products to businesses in over 100 countries. The company produces a wide range of products including dog and cat foods, treats, toys, and grooming supplies. It also provides services such as grooming, boarding, and pet training. The company was founded in 1987 and is headquartered in Eden Prairie, Minnesota. Products are sold under brands including Iams, Eukanuba, Royal Canin, and Natura.

Agrolimen SA ranks 9th on this list of the top 10 largest pet food companies in the world in 2022. Agrolimen SA is a pet food company based in Barcelona, Spain. It has been in operation for over 40 years and employs more than 1,000 people worldwide. The company was founded by Josep Maria Bataller and Josep Maria Bataller Llorens in 1977. It manufactures and distributes both dry and wet pet foods under the brands “Taste of Nature”, “Nutricat” and “Petinom”.

Rounding out this list of the top 10 largest pet food companies in the world in 2022 is Deuerer. This German company has been around for more than a century, and it first got into the pet food business in 1967 by acquiring a company called Anemone. At that time, Deuerer primarily produced wet foods for cats and dogs under the Anemone brand. In 1969, Deuerer purchased another company called Animonda, which made dry dog foods under the same brand name.

Deuerer today offers both dry and wet foods for cats and dogs under several different brands, including Anemone, Animonda, and Royal Canin (which it acquired in 2007). The company also manufactures food for other animals such as horses and birds.

This is BizVibe’s list of the top 10 largest pet food companies in the world for 2022. Various market trends affect the pet food industry. The largest pet food companies in the world are a mix of large multinational corporations and niche brands with passionate followers who love the story behind their brands. Companies need to offer balanced nutrition, great taste, and limited ingredients to attract concerned pet owners.

So, if big brands like General Mills and Mars Petcare, Inc. know how to tap into this market with the right strategies, you should too. Research how these companies approach pet food.

The Future of the Pet Food Industry

The pet food industry is one of the most lucrative and rapidly growing sectors of the food industry. In 2015, USD 69 billion was spent on pet food in the United States alone, and this number is expected to continue growing as more people choose to include pets in their families.

As the pet population continues to grow, so too will the demand for high-quality pet food. This means that there will be more opportunities for innovation within the industry. To understand what’s ahead in this sector, let’s take a look at some of the trends that are shaping its future:

The number of households with pets has increased by nearly 20% since 2004. This trend shows no signs of slowing down — in fact, it’s predicted that by 2020 there will be more than 73 million dogs and cats living with their owners in America alone! As more people adopt pets and bring them into their homes, they’ll need resources like healthy pet food to keep them nourished and happy.

The shift toward plant-based diets among humans is also likely to drive growth within this industry; since pets are family members too, many owners want them to experience similar health benefits from foods like vegan or gluten-free options

Ultimately, it’s predicted that the pet food industry will be an increasingly data-driven sector in the coming years. This makes a great deal of sense when you look at the amount of data that pet food companies are currently tracking—and it’s only going to increase as technology progresses and becomes more and more ingrained in daily life.

Additional Pet Food Manufacturers in the World in 2022

In addition to the top pet food companies, there are various other pet food industries to keep an eye on in 2022.

The Biggest Dog Food Brands in the World

This is a list of the top dog food companies in the world in 2022.

Check out the full list of the top dog companies on BizVibe.

The Biggest Cat Food Brands in the World

This is a list of the top cat food companies in the world in 2022.

Check out the full list of the top dog companies on BizVibe.