Bangladesh’s Textile Industry: More than a Medium of Women Empowerment 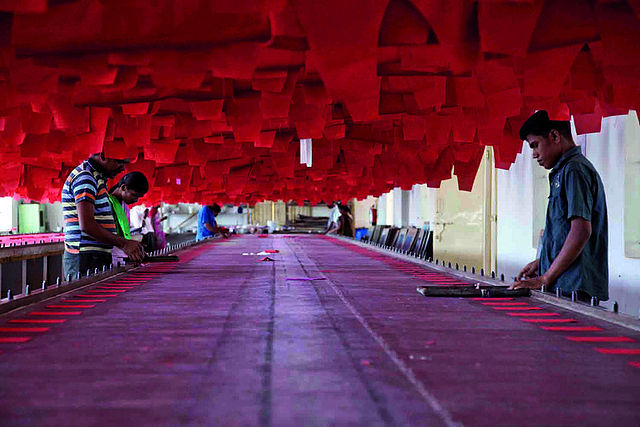 Already regarded as the next “hot spot”, Bangladesh’s textile industry contributes around 20% of the country’s GDP. The textile industry, which plays a critical role in changing the gender equation in the country and empowering women at the grassroot level, has today emerged as the backbone of the Bangla economy. Most importantly, this is one industry which has imbibed the nation’s growth and development strategies in full letter and spirit, and built Bangladesh’s image of being the textile hub of the future.

To begin with, Bangladesh, like any other developing country, is a labor-surplus economy. Thus, unemployment and disguised unemployment are inherent aspects of its economy. The textile industry, on the other hand, is not only a labor-intensive industry but also has a history of contributing to the growth of the economy.

Many of today’s highly industrialized nations stepped onto the first rung of industrialization through the textile sector. With advancements in technology, the textile industry, which was once a low-technology sector, has evolved into one of the most technically-advanced industries. This restructuring of the textile industry has helped women to become increasingly involved in the textile manufacturing process – and is believed to be the first move towards making women economically empowered.

Recognized by the UN as one of the few countries that are on track and made “remarkable progress” towards meeting their Millennium Development Goals by 2015, the government of Bangladesh has consistently made it a point that women remain the focus area in most of their policy plans. At present the textile industry employs around 4 million citizens, and is one industry where women are in high numbers – almost 90% of the workforce.

The RMG (ready-made garments) industry of Bangladesh, which started in the late 1970s, was initially developed to meet the basic needs of the country. But supportive government policies, the emergence of bilateral MFA (Multi-Fiber Arrangement) quota system and the global trend of relocating the process of garment production from high-wage to low-wage countries, worked for the textile industry in Bangladesh. It goes unsaid that since its inception, the contribution of women in the growth of this sector and largely in the growth of the country’s economy has been outstanding. What started off as a medium of integrating the villages and women into the nation-building process is gradually functioning as the backbone of the economy.

The fact that the super-powers in the Far-East region are witnessing a slug on the economic front has also emerged as a great opportunity for Bangladesh to evolve as the main productive hub for the textile sector in the world.

Despite being a booming industry, there are several loopholes in Bangladesh’s textile sector. From the need for increased investments in machinery and R&D endeavors, compliance with safety measures is an aspect which policy makers should take up seriously. The high rate of accidents in the textile sector not only highlighted the low standard of safety being followed but also threw light on the fact that many women employed in this sector are under-employed.

There is no denying the fact that textile industry has contributed immensely to building the country’s economy and empowering its women, but the fact remains that the loopholes in the system need to be plugged into Bangladesh’s growth strategy of being the textile hub of the world.

About the author: Neha Singh is the Content Editor at Technavio, she is also a blogger specialized in global industry reports and market landscape. In her spare time, she enjoys traveling and reading Jhumpa Lahiri

Amazon to Dominate the US Clothing and Apparel Mar