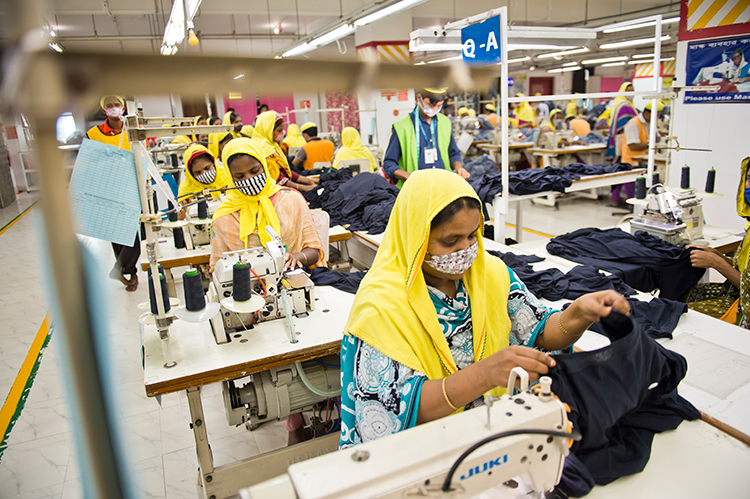 The textile labour market in Bangladesh consists of over 4 million workers, the majority (roughly 85%) of which are women. The textile industry is the largest employer of women in Bangladesh’s formal manufacturing sector. Textile labour has provided a means for many women to enter the workforce, earn their own wages, gain empowerment, and contribute to household welfare, but it has also put women at a disproportionate risk for injury, illness, death, and exploitation as a result of low wages and lack of factory safety.

Labour law in Bangladesh dictates that workers must be paid a minimum wage of USD 38 per month. Textile workers in Bangladesh earn only slightly more than this and are the lowest-paid textile workers in the world. This is far below what is needed to provide a family with food, shelter, and education in Bangladesh. Workers’ salaries would have to be almost doubled in order to qualify as a living wage. Women employed by clothing manufacturers and other textile companies often make considerably less than men. These low wages, combined with the extreme hours that most employees work, make it very difficult for people in this market to have a high quality of life.

Additionally, textile workers often face dangerous working conditions. In the last 20 years, more than 400 workers have died and thousands more have been injured in factory fires and other accidents. In 2013, the collapse of an eight-storey building containing multiple clothing factories in the Savar Upazila of Dhaka, Bangladesh, resulted in the deaths of 1,129 people and injury of 2,500 more. The factories made products for many Western-based clothing manufacturers, including Benneton and Walmart. The building’s intended use was for offices and shops, not factories, and it could not properly bear the weight of the heavy machinery that the factories were using. More than half of the victims were women, and many children who had been in daycare elsewhere in the building were also killed.

Though this incident—known as the Rana Plaza collapse—showcased to the world the conditions that workers in the textile industry in Bangladesh face, it has not resulted in much positive change. According to the AWAJ Foundation, which fights for factory safety and worker rights in Bangladesh, workers’ production targets have increased in many factories, they are forced to work unpaid overtime, and they are often not allowed to take breaks to go to the bathroom or to eat. Many work 12-15 hour days with only a few hours in between shifts to sleep, eat, and bathe. Additionally, pregnant women in many factories are not allowed to maternity leave, despite the fact that labour law in Bangladesh entitles them to 16 fully paid weeks. The Rana Plaza collapse isn’t the only disaster of its kind in Bangladesh in recent years either, but changes have not yet been put in place throughout the country to address these conditions and prevent these tragedies from occurring. Exploitative and dangerous conditions reduce production costs and increase profits for clothing manufacturers but ultimately reduce their skilled workforce as they frequently result in death or illness of the workers.

Consumers of clothing and textiles made in Bangladesh have a lot of power in changing conditions for workers. Consumers can choose to buy from manufacturers that treat their workers fairly and pay them a living wage, and can refuse to support manufacturers that don’t. When consumer demand shifts from low quality products to responsibly and ethically made products, workers benefit. Foreign businesses—particularly Western clothing companies—looking to outsource their business to Bangladesh should also ensure that their workers are treated humanely.

The textile labour market in Bangladesh has low wages and a practically unlimited supply of workers to meet increasing customer demand for cheap products in mass amounts, making Bangladesh a prime location for clothing manufacturers and textile manufacturers to outsource their production and to establish new businesses. Textile labour in Bangladesh contributes significantly to the company’s GDP and allows women to earn their own wages and make financial contributions to their households, but workers overall are too frequently exploited, mistreated, and endangered. Moving forward, workers needs to be protected, labour laws need to be more strictly enforced, and factory safety and worker safety needs to be a priority for clothing manufacturers in Bangladesh.

Thousands of Bangladesh’s leading textile companies can be in your contact list if you register to join BizVibe today! Whether you are looking reliable suppliers, top textile manufacturers, wholesalers and potential customers in over 90 major countries, or finding out what your competitors are buying and which suppliers they’re using, BizVibe can help you reach out to sales prospects and decision-makers in the textile industry across the globe.